As well as world class racing, crowds attending over the course of this fabulous three-day festival at The Curragh will have our post-race parties to look forward to, headlined by 'Smash Hits' on Saturday. Our feature race, the Dubai Duty Free Irish Derby will take place at 3.45PM

This year sees two incredible competition prizes on offer with the Most Stylish Lady walking away with a holiday of a lifetimeat home and abroad courtesy of Dubai Duty Free and The K Club. As well as being crowned ‘Most Stylish’ on the day, one lucky lady will receive return flights for two to Dubai with five glorious nights in Dubai Duty Free’s own five-star hotel, The Jumeirah Creekside, as well as €1,000 in spending money at the award-winning airport retailer. Back on home soil, the winner and a guest will also be treated to a two-night stay in a luxurious Liffey Suite at The K Club, dinner on one evening in South Bar & Restaurant, spa treatments plus transfers to or from Dublin Airport (if required). The prize for Most Stylish Man is a fantastic five-star K Club VIP experience which includes two nights in a luxury suite, dinner on both evenings in two of the resort’s stylish and buzzing new restaurants, The Palmer and South, and a long list of fabulous resort activities including segway tours, spa treatments, whiskey tasting, clay-pigeon shooting and a €500 voucher to spend at nearby Kildare Village.  Find out more HERE

12.40PM       Paddy Power’s ‘From The Horse’s Mouth’ – LIVE from The Curragh - Our expert panel look through the card for a cracking day’s racing (parade ring)

2.00PM        Dubai Duty Free Most Stylish Man and Lady competition in association with The K Club – presentation to both winners (parade ring)

*Race times and gate opening times are subject to change 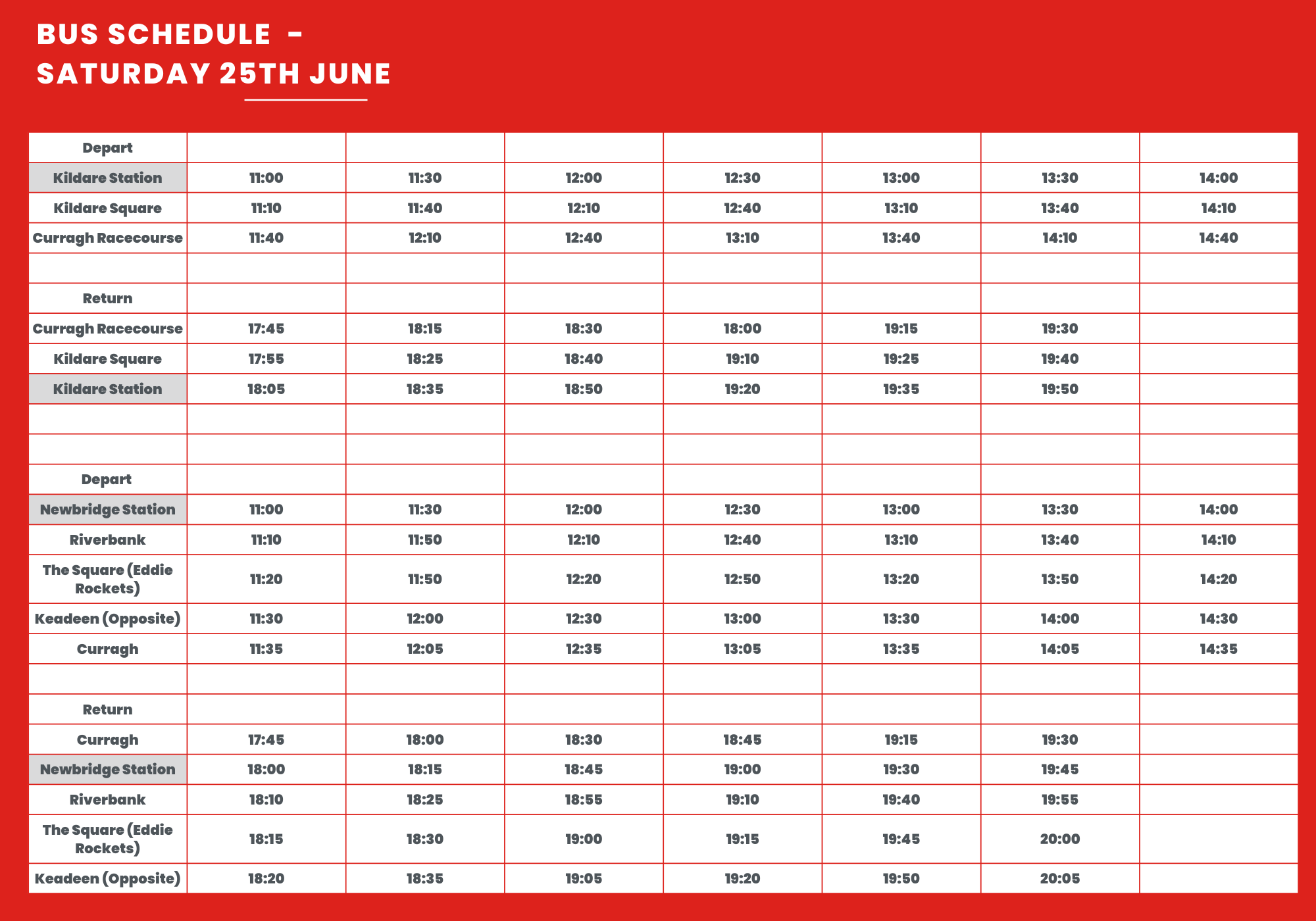 The highlight of the Irish flat racing season, Dubai Duty Free Irish Derby is one of the great race days in global horse racing.

The Dubai Duty Free Irish Derby Weekend is three days of top quality racing showcasing the best that Ireland has to offer. The iconic festival is one of Ireland's biggest social and sporting occasions, a whirl of music, dancing, fashion and racing that attracts some of the world's top horses and jockeys.

The Irish Derby is the third and most important Irish Classic and Group 1 of the Flat season. Run over a distance of one mile and four furlongs at the Curragh, it is open to three-year-old colts and fillies. Many horses which have previously contested the 2,000 Guineas in Ireland, England and France and the English and French Derbies traditionally come to the Curragh for the Irish Derby.

The ﬁrst running of the Irish Derby took place in 1866 and was won by the English raider Selim who struck for trainer Tom Cliff after accounting for just two rivals. Cliff supplied the winner again the following year and to date English raiders have enjoyed 53 victories in the race. From 1866 until 1871 the Irish Derby was run over a mile and three quarters before reverting to its present distance. The ﬁrst horse to complete the Epsom-Irish Derby double was Orby – the ﬁrst Irish-trained winner of the Epsom race – in 1907. After its prizemoney was substantially increased in 1962 (when it was ﬁrst run as the Irish Sweeps Derby), the race began to attract stronger ﬁelds and in 1964 Santa Claus became the second dual Derby winner. Thus far a total of 18 horses have won both the Epsom and Irish Derbys.

There have been two dead heats in the Irish Derby. Haine and Zodiac were inseparable in 1924 and ten years later the honours were shared between two more English runners in Patriot King and Primero. Easily the biggest surprise in the race’s history came in 1954 when Zarathustra sprang a 50/1 surprise for Michael Hurley and Paddy Powell. Subsequently Zarathustra won the Irish St. Leger and he proved himself an outstanding stayer in the coming years with his victories headed by the 1957 Ascot Gold Cup. The largest Irish Derby ﬁeld went to post in 1962 when Tambourine II defeated 23 rivals to become the ﬁrst French-trained winner of a race whose prizemoney had increased sevenfold on 1961. There have been seven more French-trained winners since then with the last coming when Hurricane Run prevailed in 2005.

RACING TV show every race live which you can watch on your TV, tablet or mobile. For more information and to create an account, visit the Racing TV website.

RACING REPLAYS If you missed any of the action, you can watch all the replays here and on The Curragh Twitter and Facebook.

19 runners to line up in Goffs Million this Saturday

The Curragh set for Autumn Festival this Weekend

Rachel Allen to cook up a storm at Taste of Kildare