5.30 Heed Your Hunch at Betway Handicap

The Irish 2,000 Guineas is the first Irish Classic of the flat season. It is run over one mile and is confined to three-year-old thoroughbred colts and fillies only.

One of the three most prestigious sprints in the Irish racing calendar, the Greenlands Stakes takes its name from the area of the Curragh plain where the racecourse is located.  In 2015 the race was upgraded to Group 2 level and restricted to horses aged four or older as part of a significant reshaping of the Irish sprinting programme.
In recent years Slade Power (2014) and Merchant Navy (2018) have won this race before going to land the Diamond Jubilee Stakes at Royal Ascot. College Chapel completed the same double as a three-year-olds in 1993 while the 2000 winner Namid went on to win that year’s Prix de l’Abbaye.

We are delighted to announce that the Tipperary Crystal Romi Dublin Virtual Style Event will take place on Saturday 22nd May.

Judges are Ireland AM presenters Judy Gilroy & Lorna Weightman and they will be looking for an Individual & Authentic Racing Style in line with the Romi brand "As Individual as you".

So getting planning your outfits ladies! 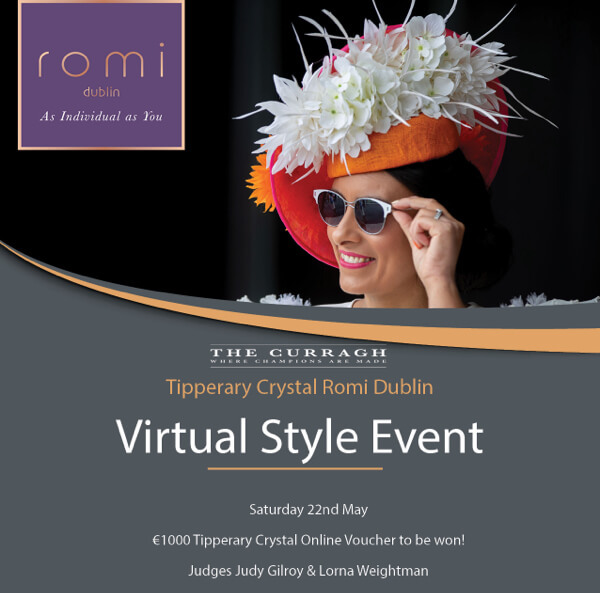 RACING TV show every race live which you can watch on your TV, tablet or mobile. For more information and to create an account, visit the Racing TV website.

RACING REPLAYS If you missed any of the action, you can watch all the replays here and on The Curragh Twitter and Facebook.