A typically strong overseas and home-trained contingent are to set contest the six Group 1 races on Longines Irish Champions Weekend at Leopardstown and the Curragh on Saturday and Sunday.

Ghaiyyath is on course for a fourth consecutive Group 1 success in the Irish Champion Stakes on the opening day of the meeting at Leopardstown on Saturday.

His trainer, Charlie Appleby, revealed at lunchtime on Tuesday, “Ghaiyyath will work tomorrow morning, we will have a final discussion then and if everyone is happy our intention is to fly to Dublin on Saturday morning.”

Godolphin's superstar became the highest-rated horse in the world when adding the Juddmonte International at York last month to earlier top-level wins in the Coronation Cup at Newmarket and Sandown’s Coral-Eclipse.

The main opposition to Ghaiyyath is expected to come from the horses he beat into second and third place respectively at York, the Aidan O'Brien-trained Magical, winner of the Irish Champion Stakes last year, and John Gosden’s Lord North.

Jean-Claude Rouget won the Irish Champion Stakes with Almanzor in 2016 and he will run last year’s French Derby winner Sottsass, a winner again at Chantilly in the Group 1 Prix Ganay in June while Barney Roy could accompany stable companion Ghaiyyath on the trip to Dublin.

In all, 13 horses have stood their ground for the Irish Champion Stakes with Anthony Van Dyck, Japan, Magic Wand, Vatican City and Armory still in the race for Aidan O'Brien, Jessica Harrington has Leo De Fury and Joseph O'Brien could yet call upon Buckhurst and Degraves.

The Donnacha O'Brien-trained Fancy Blue and Aidan O'Brien’s Peaceful head an entry of 13 for the Group 1 Coolmore America 'Justify' Matron Stakes. There was little between the pair in the French Oaks at Chantilly last time. Aidan O'Brien has four horses remaining in the race with Magic Wand, Love Locket and So Wonderful in with a chance of joining his Tattersalls Irish 1,000 Guineas heroine.

Joseph O'Brien has left A New Dawn, Wilds Dreams and New York Girl with both Champers Elysees and Know It All in the mix for Johnny Murtagh. Jessica Harrington has both Albigna and Valeria Messalina with the Fozzy Stack-trained Lady Wannabe completing the latest line up ahead of Thursday’s declaration stage.

There are four Group 1 races at the Curragh on Sunday and the second day of Longines Irish Champions Weekend is highlighted by the Comer Group International Irish St Leger.

Seventeen horses remain in the final Classic of the season, the Comer Group International Irish St Leger, with the Roger Varian-trained Royal Ascot and York Ebor winner Fujaira Prince and Dermot Weld’s Search For A Song, a brilliant winner of the race last year, leading the way.

Joseph O'Brien is very well represented with Twilight Payment, Galileo Chrome, Master Of Reality, Bolleville and Pondus still engaged while his father Aidan has left in Sovereign, Passion and Shoshone Warrior. Willie Mullins won the race with Wicklow Brave in 2016 and he looks set to rely on his runaway course winner Micro Manage.

There are also 17 horses remaining in the Group 1 Derrinstown Stud Flying Five Stakes, headed by the Denis Hogan-trained Make A Challenge and Kevin Ryan’s Glass Slippers. A strong British contingent also includes Que Amoro, Liberty Beach and A’Ali. The Paddy Twomey-trained Sonaiyla was added to the race this morning.

A total of 16 horses are going forward for the Goffs Vincent O’Brien National Stakes and among them is the Charlie Appleby-trained Master Of The Seas which will bid to give his trainer a third consecutive win in the race. He is a Group 2 winner and unbeaten in both starts at Newmarket to date. Royal Ascot winner Battleground, trained by Aidan O'Brien heads the home team along with Lucky Vega, the three and a half-length winner of the Group 1 Keeneland Phoenix Stakes at the Curragh for Jessica Harrington and Jim Bolger’s Group 2 Galileo Irish EBF Futurity Stakes winner Mac Swiney. The John Murphy-trained Charterhouse and Joseph O'Brien’s Thunder Moon, both impressive course and distance winners, were supplemented for the race this morning.

Tim Husbands, CEO of Leopardstown Racecourse, said: “We are delighted with the depth and breadth of entries across the weekend, today’s final entries and forfeits reveal what will be a thrilling weekend of top class action. The supporting races are equally as strong and the weekend is shaping up to become a world-class sporting event.”

Pat Keogh, CEO of the Curragh Racecourse said: “Longines Irish Champions Weekend, only in its seventh year, has already established itself as one of the major festivals. The quality of racing is always excellent and we are delighted with this year’s entries. It promises to be two very special days racing.” 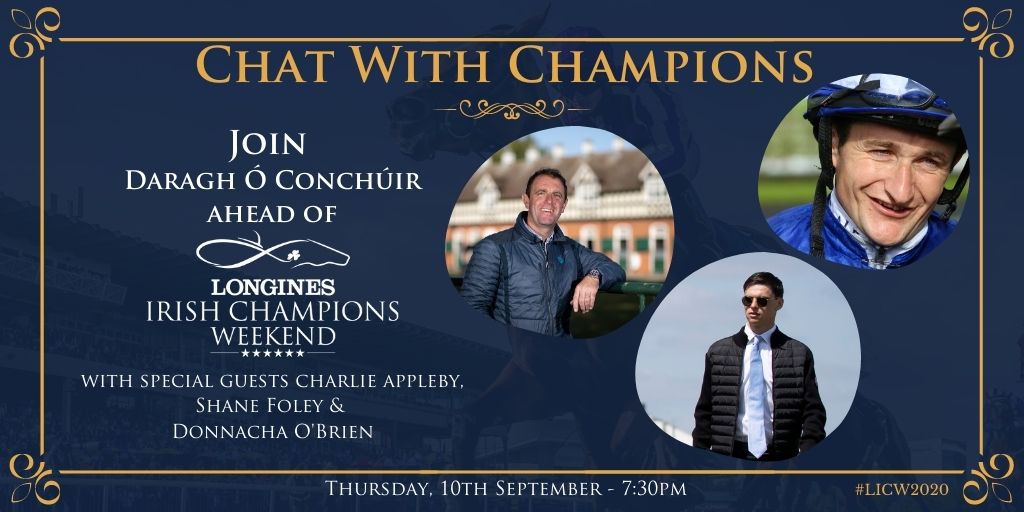 Over €175,000 raised in horse racing and cycling fundraiser for Cancer Trials Ireland

19 runners to line up in Goffs Million this Saturday

The Curragh set for Autumn Festival this Weekend